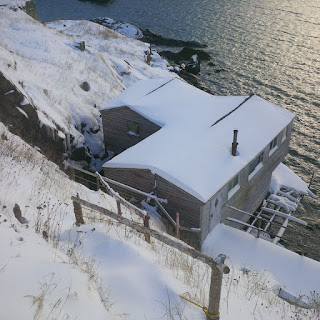 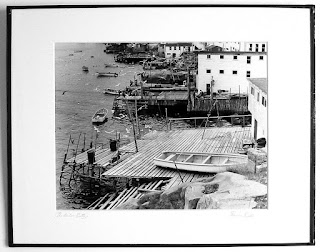 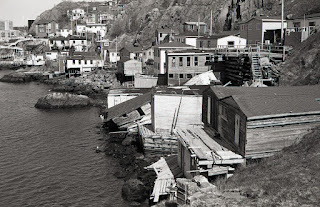 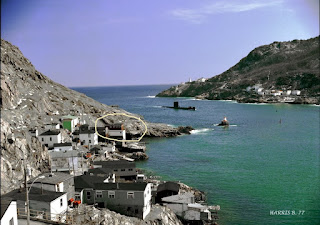 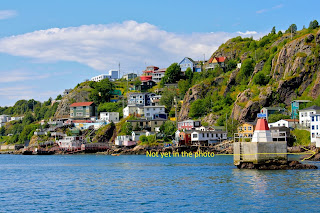 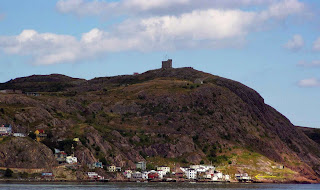 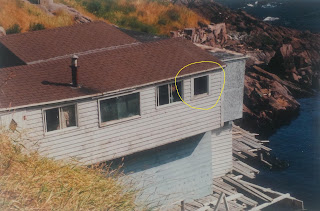 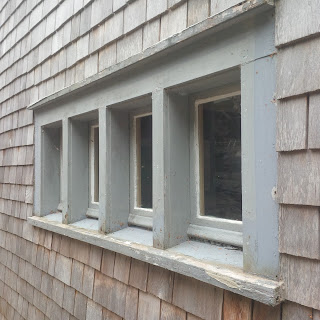 Posted by Steve Topping at 8:58 AM No comments: 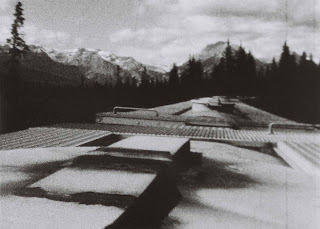 Reading Canada Backwards   ----------Technique: pixilation/ stop motion, shot:1995, Super-8 (black and white Tri-X)
The important thing about this film is that it is proportional to the landscape from Vancouver to Halifax, Canada. It's shot at a rate of 3 frames per mile and so one can compare the geography of the county.... the film as a map. The film is 12000 frames of film long. I shot 90 single frames of film, at 30mile intervals, for the length of the country (4000 miles, 6000kms) using the spacing of telephone poles to keep the film moving at a constant rate.

At the time Reading Canada Backwards was made, I had much experience riding freight trains, having crossed Canada many times, I started the trip with idea to see all the landscape of Canada during the day; the camera was only there to document. I thought it would be a challenge but never did I think it would prove nearly impossible. I had to catch a new train every morning, illegally in full daylight and get off before nightfall.

While shooting this super-8 film I carefully held the camera parallel with the train and level with the horizon with the help of a speed level strapped the the camera. I never looked through the viewer of the camera during shooting as I saw film making as a perversion of the real, in the moment experience of holding down a freight. Just to say that the film had life of it's own during this epic voyage across the country. There is no editing in this film.... all the frames are present.... only spliced together from 5 rolls. My idealism failed during the making of this and I was quickly drawn in by the project of completing the film and not by the project of witnessing the entire country. It took one month of shooting to complete. I was asked to leave railway property but was never arrested (on that trip.) I rode every summer for eleven years from 1990 to 2001 and have travelled more than 50,000 miles by freight train.

Sound: The original sound was blues guitar over looped rail road sound samples and was intended to calm the viewer while watching the hyper-kinetic and super-boring images, however, I think silence works better.

There were very important contributors to this project beyond who is mentioned in the film titles. I would like to thank:

Steve Topping,
.....on the 17th anniversary of beginning this film.

Here is project I did in Rimouski through a residency at Caravanserail. Great town, wonderful people who are obsessed with ice, ice fishing and le banquise (ocean ice sheet) that forms every year. Le banquise acts as an extension of the public space of the city of Rimoiski. The ice sheet is moving up and down with the tide, sometimes by 4-5m so one must know what one is doing or at least listen to someone who does.
I made a machine that casts blocks of ice with one convex parabolic surface. The curve is accurately made by slowly spinning the form while the blocks freeze. Inter-cooled air from a blower lifts the form with 50kilos of water and helps the freezing process and aids in the formation of clear ice. Excess pressure from the blower is released by jets on the end of the form for the slow, even spin.
Once formed, the blocks can be stacked to create a low or a tall wall which can be used to reflect one's voice to another "transmitter" and to another person. 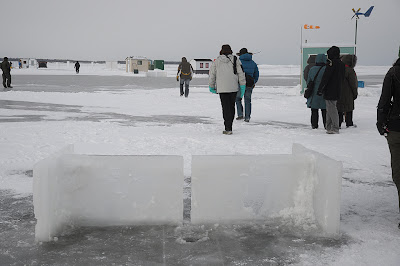 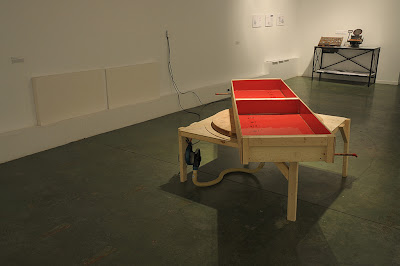 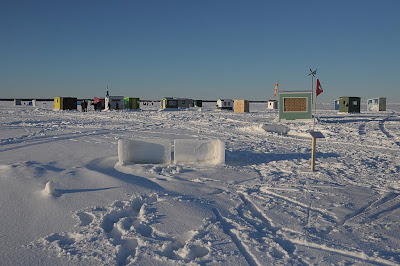 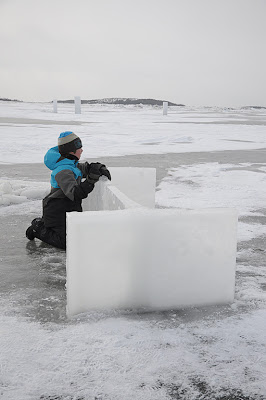 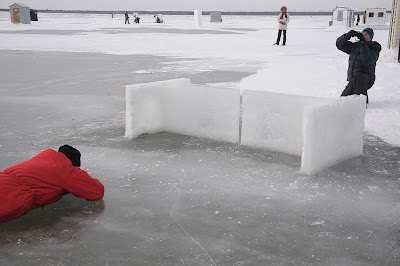 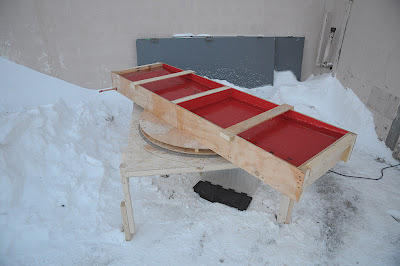 Posted by Steve Topping at 11:33 AM No comments: 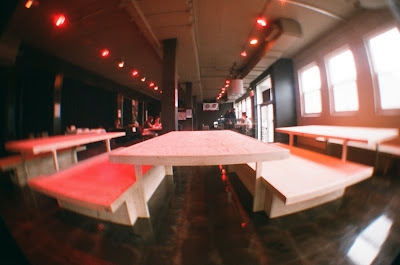 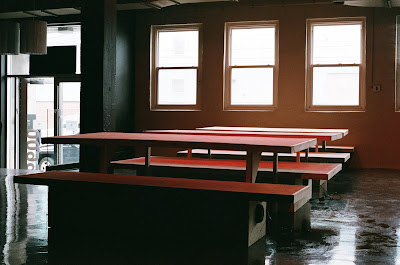 These are some pictures from the latest show here in Montreal's Art Pop; a part of Pop Montreal music festival.

I have been trying to harmonize my building practice with my artwork lately so when curators Kit Malo & Julien Ceccaldi first approached me about the show my response was to work in relation to what the show needed. I proposed I work with them and the artists to plan, layout and divide for the exhibition. The purpose was to resolve spacial and acoustic issues with the time line/ budget at the same time to use sculptural materials that could be reused when the show was done.

It went so smoothly I thought it necessary to plan another semi-functional sculpture in the form of work tables and seating. However the need was there to make it movable so I set out to resolve a longstanding peeve of mine: How to build large mobile furniture without wheels.

No wheels since the furniture moves when you don't want it to just as much as when you do.... unless you build in costly and laborious mechanisms to lock or retract them.

So I tried out the old hover trick and I am satisfied that it has not yet run out of uses. Each bench has an electric leaf blower or a vacuum machine blower and a rubber gasket and can float several people plus it's own weight.

Thanks to Jhave Johnson for the video.


Here are some images of the divisions we made. 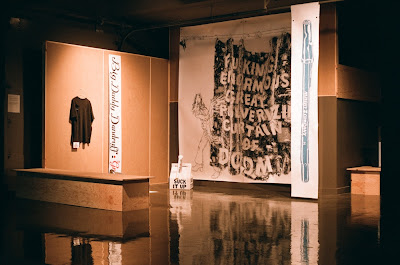 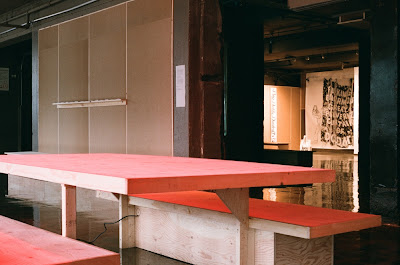 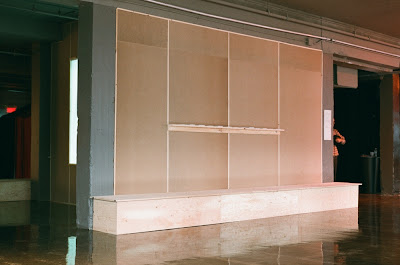 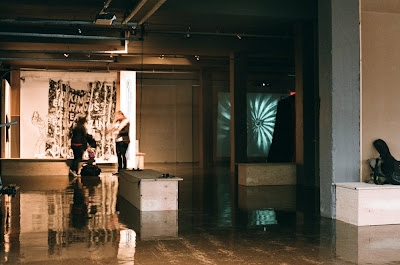 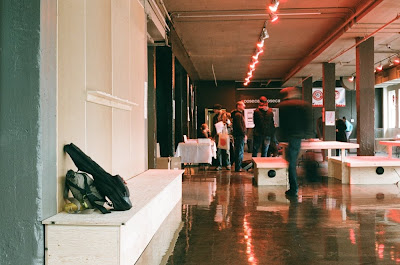 Posted by Steve Topping at 8:48 PM No comments: 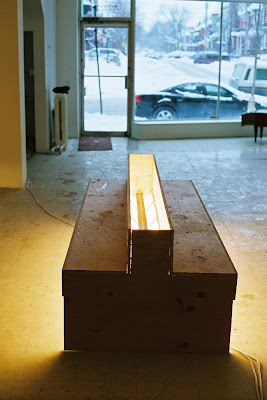 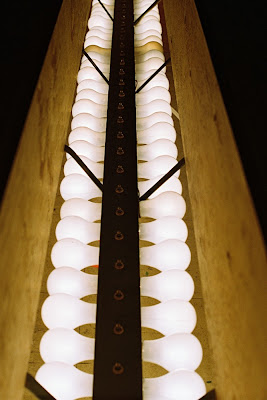 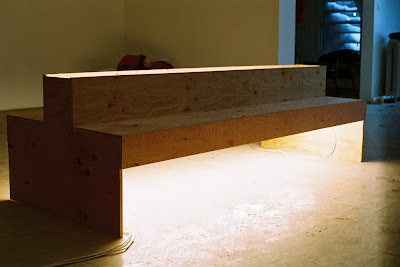 My thing was this thermostat controlled heating device that challenged the prevailing wisdom with regards to efficiency and light bulbs during the winter by turning the exhibition into a Betty Crocker oven. 60x100watts makes a 6000w hot seat.
Posted by Steve Topping at 7:38 PM No comments:

A1C has only one window in the gallery space. One of the two pane spaces in the window was covered with plywood so I decided to use the space for a glass sculpture. The window was at knee level on the side walk outside but on the ceiling in the gallery. The window was illuminated for most of the day and the light was intended to be blocked by passers-by. Thanks especially to Dave Hopley of Living Planet for donating most of the glass and St. Micheal's print shop for filling the remaining 3" at the end with scratched up old palates. 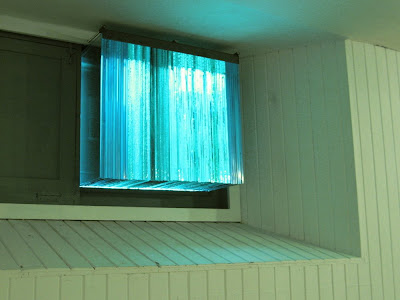 "Substitute" at A1C, StJohn's Nfld. A1C is a new Artist run initiative that spawned from the RCA at LSPU hall.
Posted by Steve Topping at 8:57 AM No comments:

spYder at the Cinémathèque Québécois

Here is my recent construction on show at the Cinematheque until April 30th. 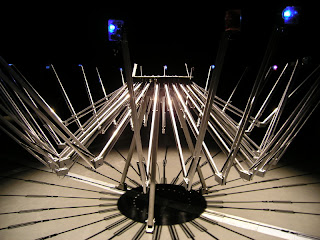 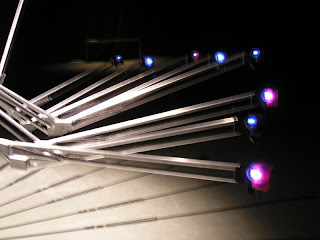 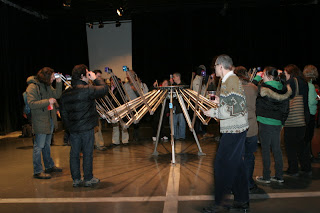 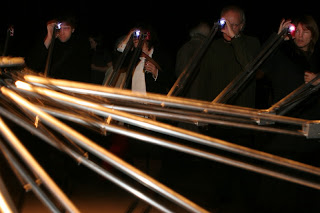 The armature for this exposition is designed to illuminate, provide power to each viewer’s motor and house all commissioned super-8 films.

It allows people of different heights to view them while keeping the scale of the armature as compact as possible. But importantly this structure is logical creation and it’s aesthetic is intended to read as such. It is also built to function as a kind of spectacle for exposition but the spectacle I hope remains firmly on the ground.

There were a great number of people who helped me out ......

Posted by Steve Topping at 5:52 PM No comments: